Currency - All prices are in AUD

Currency - All prices are in AUD

The Rockwell Hardness Tester was designed in 1919 by Stanley P. Rockwell. He was a metallurgist in a New England ball bearing manufacturing plant. Until this time industry lacked a good method for measuring the hardness of ball bearing races and other hardened steel parts. Mr. Rockwell studied the problem and through experimentation for accurately measuring part hardness, he invented the Rockwell Hardness Tester.

The early model of the Rockwell tester had a sturdy, hollow cast frame. The head consisted of a precise measuring dial and a plunger that held the indenter. A series of levers with a knife edge connected the plunger with a weight. This weight, originally called the "final weight" (now known as the major load), was applied and released by a hand lever. The test piece was held by an anvil on top of an elevation screw that was raised and lowered manually by the use of the capstan nut. An initial pressure (now known as the minor load) was applied by compressing a spring in the head of the tester by raising the elevation screw. The hardness was read directly from the dial face on the tester, once the final weight was removed with the hand lever. 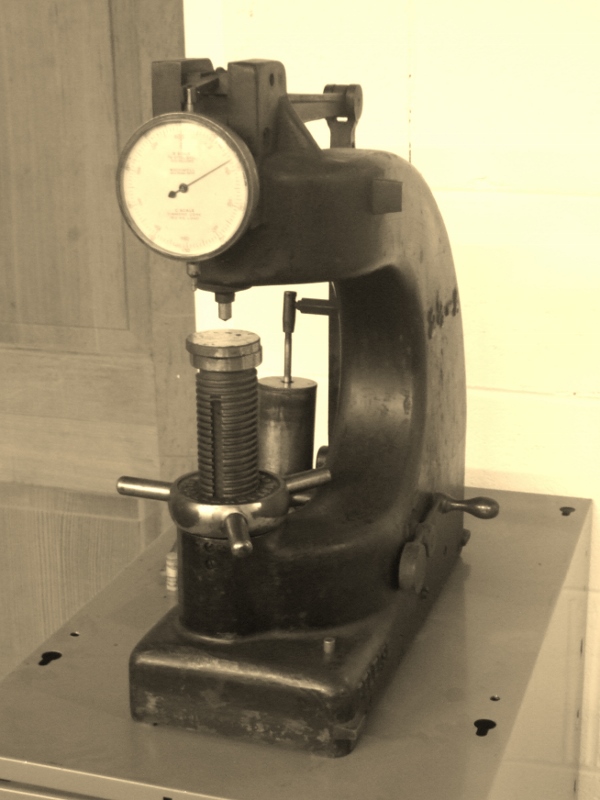 Since the Rockwell tester was first put into use it has been refined and improved. However, the test principle remains the same. Modern Rockwell hardness testers are now available in many different models and configurations such as: Bench models in both digital and analog, Portable models, Automatic/Production models, and Load cell models.

Pictures are of our Wilson-Maeulen Co. Rockwell Hardness Tester model 2-1/2-A circa 1924.